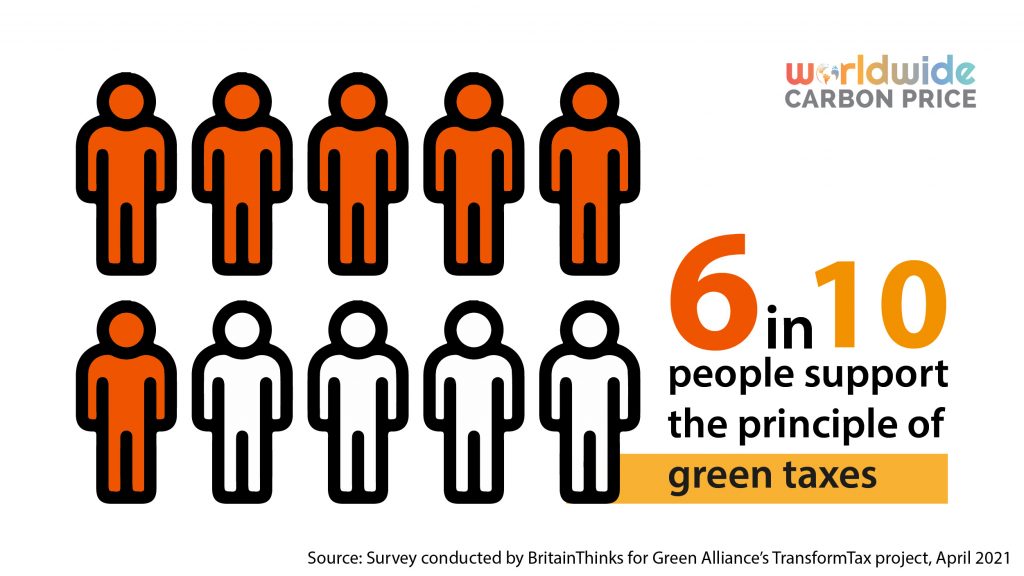 Six in ten people support the principle of green taxes, that environmentally damaging behaviours should be made more expensive, and only one in ten oppose, according to the results of a recent survey of over 2,000 people. [1]

This gives government a mandate to start to green the tax system through Treasury’s imminent Net Zero Review.

Taxes alone cannot be the solution to the environmental crisis. Reforms should be implemented alongside other policy measures and carefully designed to ensure efficiency and fairness.

As exclusively reported in the Financial Times this morning, a new survey conducted by BritainThinks for Green Alliance’s TransformTax project has revealed broad support for greening the UK’s tax system. [2]

People believe they can do more, too
People also believe responsibility extends to them: 63 per cent feel it is important to change their own lifestyle to tackle climate change and 64 per cent say they have already made some changes.

Greening the tax system is widely supported
Green taxes, which would help people and companies to make more changes, are strongly supported. Six in ten people support the principle of green taxes, with only one in ten opposing it. [1]

Taxes related to carbon, unsustainable consumption and material use are also supported
A majority of people think specific reforms are good ideas, including:

This gives the government a clear mandate to start to make changes to green the tax system. Steps should include ending current tax reliefs that work against the government’s environmental goals while costing the Treasury £17 billion a year in lost revenue, as well as designing and implementing new taxes to drive environmentally beneficial behaviours. [3]

Time is of the essence if government is to develop and implement robust policies that can contribute to the UK tackling climate change and restoring nature at the speed necessary. Well designed reforms must not only to have positive environmental impact and avoid unintended consequences, but also to be fair, acceptable and understandable to taxpayers.

Tax is not the whole answer to environmental challenges. We also need new regulatory changes and significant public and private investment. But careful tax reforms are an important part of the broad set of policy measures that will shift the UK to a much more sustainable path, and deliver the green recovery the prime minister has promised.

Libby Peake, head of resource policy at Green Alliance, said:
“Tax is one of the most powerful tools government has to deliver policy, shape the economy and give people and businesses alike incentives to do the right thing. In the fight against climate change and nature’s decline, it’s not being used to anything like its full potential. Far too often the system rewards bad behaviour and punishes those who want to do the right thing. This survey shows people want that to change and there is a mandate for the Treasury to reset its approach in its forthcoming Net Zero Review.”